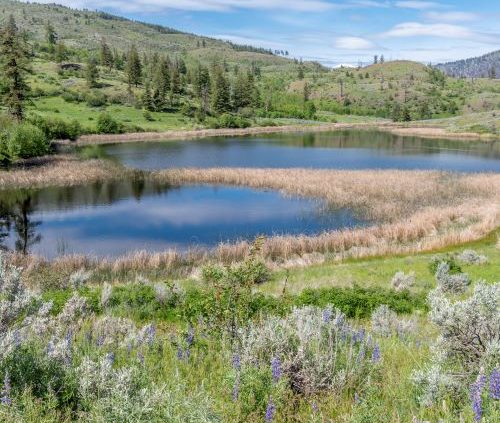 Osoyoos, BC (December 15, 2020) – An internationally significant conservation area just outside Osoyoos has just gotten bigger. The Nature Conservancy of Canada is announcing the addition of 126 hectares (311 acres) to the Sage and Sparrow Conservation Area.

Located fewer than 30 minutes west of Osoyoos along the Canada / U.S. border, Sage and Sparrow now encompasses over 1,500 hectares (3,750 acres) of rare grasslands and interior Douglas-fir forest at the confluence of the Okanagan and Similkameen valleys. This area is within the traditional territories of the Syilx (Okanagan) Peoples.

The Sage and Sparrow Conservation Area is nestled within the provincial South Okanagan Grasslands Protected Area. The new addition extends the conservation area to the north, filling in a gap in a north-south conservation corridor in one of the country’s rarest and most threatened ecosystems.

The new conservation lands span a diversity of habitats. In addition to sagebrush steppe and bunchgrass-dominated grasslands, the land includes some of the oldest stands of interior Douglas-fir and ponderosa pine forest in the broader area. Two large wetlands provide precious moisture in this arid landscape.n

Woodlands of trembling aspen offer nesting habitat for birds as well as cooling shade during temperature extremes for all wildlife. Snakes, gophers and mice make use of the pockets of rugged terrain scattered throughout the property. And the variety of terrain, micro-climates and structural diversity add immensely to the property’s conservation value.

The Sage and Sparrow Conservation Area is open to the public for walk-in access only. Click here for a bird’s-eye view of the new acquisition.

This project has been made possible by the contributions of many funders, including the Government of Canada through the Natural Heritage Conservation Program, part of Canada’s Nature Fund, Regional District of Okanagan-Similkameen, U.S. Fish and Wildlife Service, Sitka Foundation, Okanagan Similkameen Parks Society, Oliver Osoyoos Naturalists Club, South Okanagan Naturalists’ Club and many generous donors.

NCC received just over $266,000 from the South Okanagan Conservation Fund to help secure the property.

“The Regional District of Okanagan Similkameen is proud to be working with the Nature Conservancy of Canada to help protect the region’s natural heritage. Expanding Sage and Sparrow will provide greater security to dozens of at-risk species, in one of the province’s most unique landscapes.” Karla Kozakevich, chair, Regional District of Okanagan Similkameen.