British Columbia’s Southern Interior, also known as Canada’s Great Basin, is home to some of the most endangered species and habitats in Canada! At least 15% of the regularly occurring landbird species in the region are at risk at the provincial or federal level. Even some common species are experiencing dramatic population declines. Habitat loss and degradation are the main threats to bird populations in the region. Partners in Flight (PIF) BC and Yukon, and the Canadian Intermountain Joint Venture (CIJV), are using a habitat- based conservation approach to maintain the health of bird populations and their habits. It is an exciting time for groups and individuals committed to the conservation of landbirds in BC and the Yukon. In addition to the recent international initiatives for landbirds, we are working hard to translate such resources into local action to improve the health of landbird populations and their habitats regionally.

Land Trust Alliance of BC 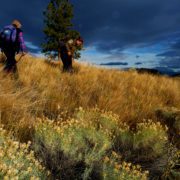 SOSCP is Hiring - Land Use Biologist

Want to join the discussion?
Feel free to contribute!